It opens your nasal passages :)

As I go through my abundance of Photos throughout the years, there is a pattern that develops. There are a tuuuuuuun (elongated pronunciation of ton) of photos, which is a favorite word of mine lately. So instead of focusing on a photopourri (photographic potpourri) like usual, instead there will be focus on a single location.

Today I would like to focus on Isla del Sol. It is an island on the Bolivian side of Lake Titicaca. It is the largest island on Lake Titicaca home to around 800 families. The island is rocky and has no paved roads, it is home to an abundance of Eucalyptus trees, the leaves are very fragrant. I believe the top of the island is above tree line in altitude, because there were no trees on the highest part of the island. The elevation of the lake is 3,800 meters, while the top of the island is 4,100 meters. Tree line is not an exact figure and varies greatly depending on the terrain, but 4,100 meters seems plenty of elevation for this. Life on the island is quiet and peaceful. Especially when you go to the far side of the island. Tour boats go out to the island all the time, so there is a constant trickle of tourists, but you can still find a great deal of tranquility there. The views of the Mountains are incredible, it is like being on the Mediterranean and in the middle of the Andes. Though it is much colder than the Mediterranean.

The island was first recommended to me by an Argentine travel pal named Javier from B.A. I met him on a Cusco city tour and he could not stop gushing about his visit to the Island. I had already been to the Peruvian side of the Lake and was not sure I could justify going there again, but I kept that in the back of my mind until the opportunity arose later in the trip.

It was after my trip to Machu Picchu when I heard from another friend about the adventure she had on the Death Road in Bolivia. The Death Road is a Mountain Biking expedition down a notoriously murderous road through the mountains and into La Paz. It had been closed off long before and turned into a tourist attraction for daring gringos like us. Anyways, her enthusiasm convinced a few of the other friends in Cusco and we decided to go.

It was a hard decision for me as an American, because they charge US citizens 150 dollars to get in. This is totally justifiable to me, because the US is notorious for dicking people around when they try to visit or move to the country. Still, I was not sure if I could afford 150 dollars, that is about a months worth of money in Cusco, the way that I was living. However, the tales of the Island of the sun and the rumored festival on the island that I could attend clinched the deal. I also ended up saving a weeks worth of lodging by bar tending at the hostel and the rooms on Isla del Sol saved me some money as well. The point is it all worked out and looking back, it was one of the most incredible and unique travel experiences I have ever experienced.

When we arrived on the island, we eventually found out that the festival wasn’t really going to happen, so I just ended up staying on the island for 7 days. Hanging out with the other “volunteers” walking the trails on the top of the island to the market for food. Walking to the Ruins and the wifi on the other side of the island, which was a day long errand. It was pretty mind-blowing to live such a calm life.

We also spent many of the days with participating in Incan rituals with some of three Elders. The Island is the setting of an origin myth for the civilization. It is said that Manco Capac the first Inca emerged from the Titikala (sacred rock) on the north side of the island. He is the son of Inti, aka the sun, and so this specific rock is sacred in a very sacred island. In another telling, the people on the island were without sun for many days and became frightened, then the sun emerged from the sacred rock and gave them light again. In still another version, it is said that the sun hid under the rock when during a great flood and when the waters receded, the sun emerged form this location. A temple was built at this location and ruins of the expansion by the tenth Inca Tupac Inca Yupanqui, can still be seen today. (source: wikipedia “isla del sol”)

Subsistence framing and agriculture are practiced on the island, but as with many historical incan sites, most of the income is from tourism.

And now for the photos.

This is the view from the High Trail on the island. It connects the various villages and intersects with the other trails leading people to the ruin sites and the locations for lodging and camping.

The welcome sign and someones coat covered arm. You do need your coat quite a bit since the lake is 3800 meters, Mediterranean views with High Alpine weather.

The Sheep were everywhere and their calls sounded very much like humans at times. 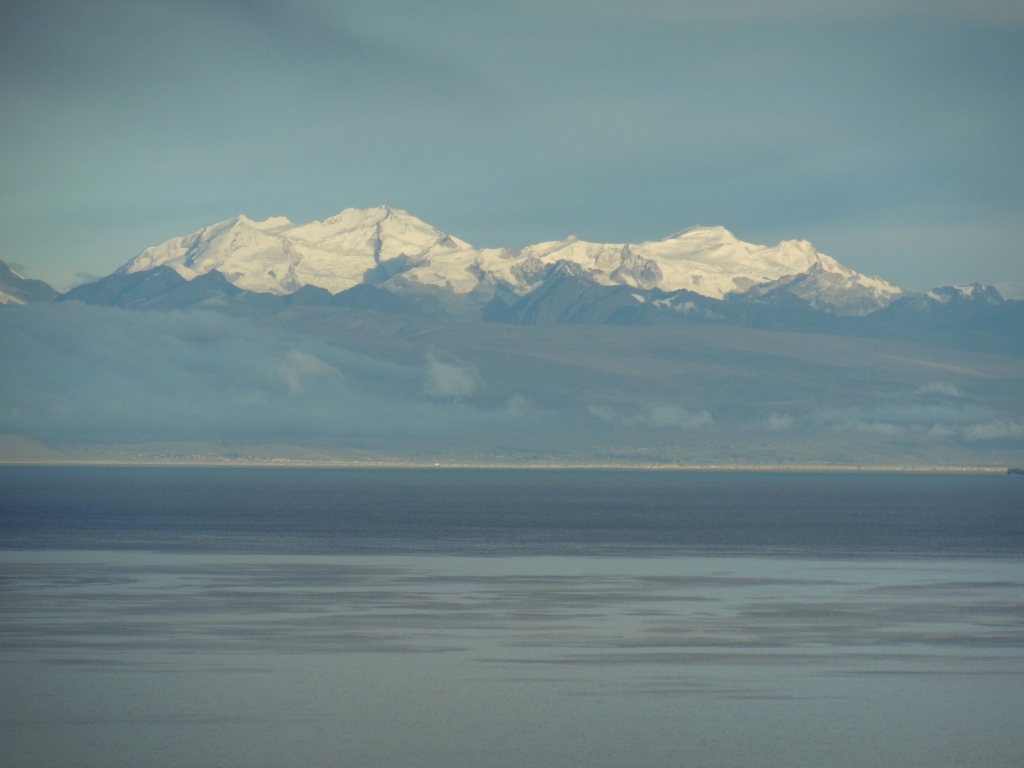 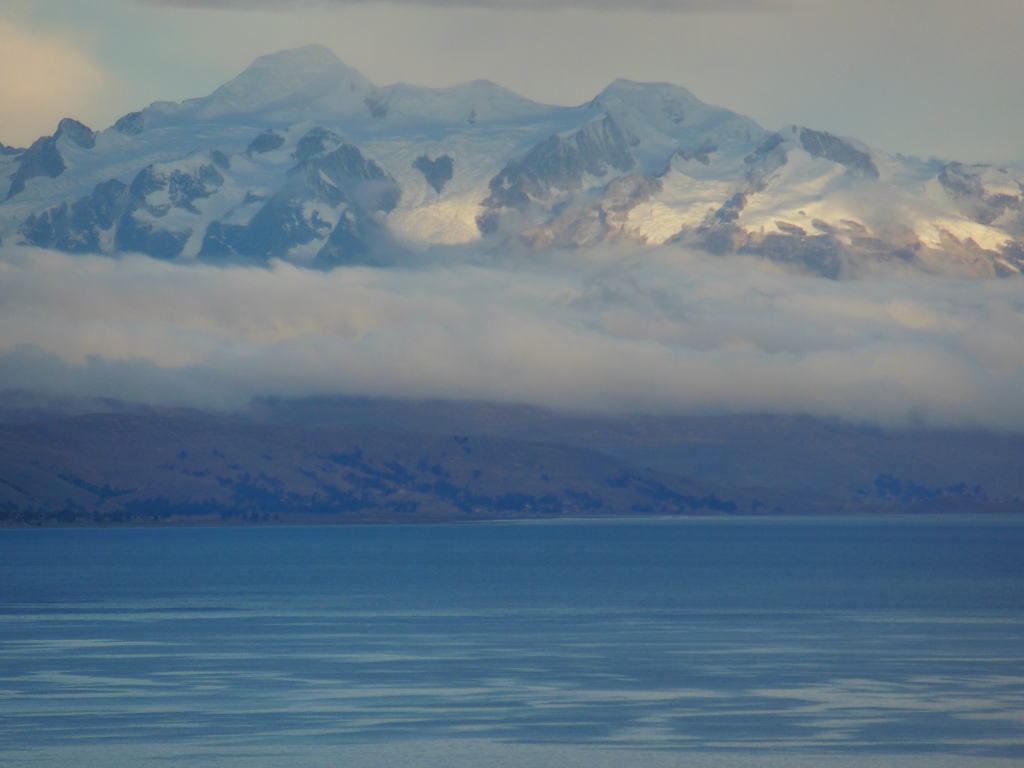 Views of the Mountains surrounding the lake. The grander mountains are on the Bolivian side. Bolivia is such an amazing place to visit. All the countries in South America that I have visited have varied terrain, but Bolivia was the most spectacular juxtaposition.

The lambs were heart melting every time I saw or heard one of them. 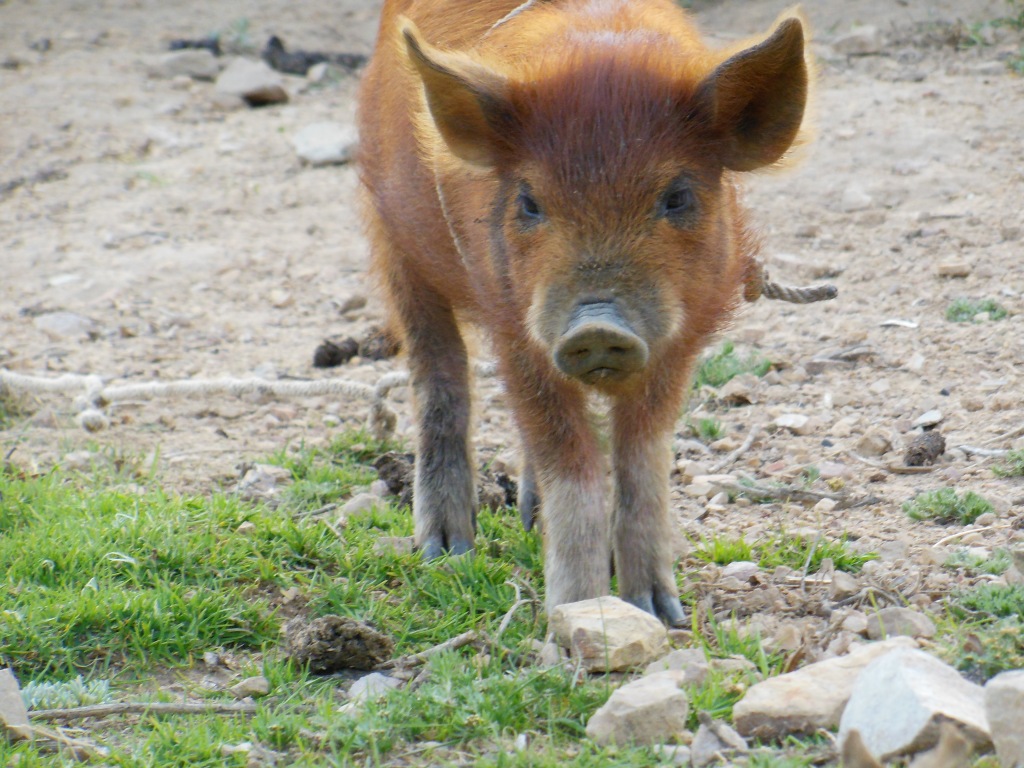 And the piglets were about as cute as piglet on winnie the pooh. Except the were real.

The view of the village from the trail to the other side of the island and the internet.

View of pretty yellow flowers and the internet. Both of which were very scarce on the island. The rockier climate is not as easy for most flowers to grow into. And I found I didn’t need the internet all that much after all.

A view from the trail partway to the other side. About 45 minutes walking to this point.

A view of the blue, with a little bit of the island mixed in. The colors get very vivid when you get above 3500 meters and at the point we are way above that point. I am more of a mountain type of a person, but this island started to convince me that island life might be a way to go.

Sharing food among friends is one of the best experiences while traveling. It is something that is often lost in my day to day life at home. Where I eat many meals alone in between jobs and school breaks or whatever it is I am doing. Traveling gives you a chance to enjoy those times in a comprehensive way. This was especially true on the island since most activities consisted of walking to get food, returning with food and then preparing and eating food. With some swimming and Incan rituals mixed in. 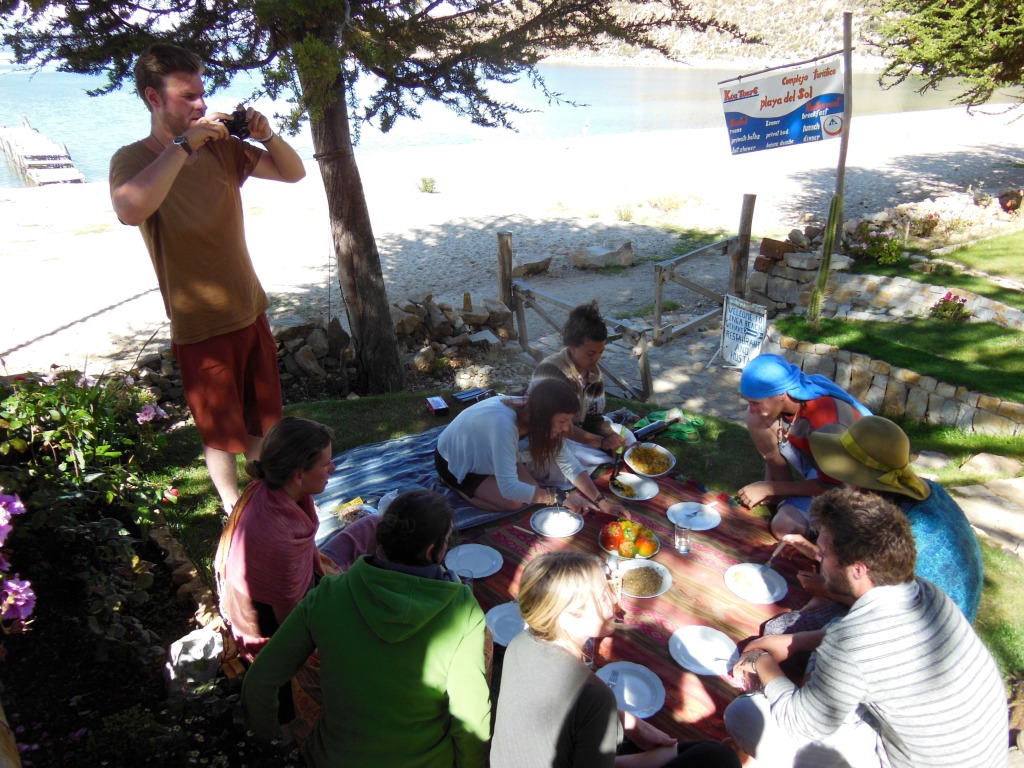 People, the greatest boon of a traveler. It is the people you meet that are the most important. Life is expressed more fully while on these adventures and so are human relationships. You get to know people better in a few days or weeks than some people you know for years at home. It allows you to open your heart, find common ground and exalt in the similarities and differences between you.

“Through the years a man peoples a space with images of provinces, kingdoms, mountains, bays, ships, islands, fishes, rooms, tools, stars, horses and people. Shortly after his death he discovers that the patient labyrinth of lines traces the image of his own face.” Jorge Luis Borges.